Diaphragm walls serve a structural and/or sealing function and can be used both as a cut-off wall for a dam or excavation pit or as foundation for or to encapsulate a building. They are constructed as concrete or reinforced concrete walls from the ground surface, are considered highly resistant to deformation and virtually impermeable to water. It is excavated in sections with duty-cycle cranes with appropri-ate diaphragm wall grabs or cutters using a supporting fluid between prefabricated guide walls, which serve in particular as a guide for the extraction tool, facilitate support liquid level fluctuations and absorb loads from reinforcements or joint elements. After the final depth is reached, the support liquid is recycled.

n addition, temporary or permanent joint systems can be inserted into the trench, and reinforcement cages can be installed. It is then concreted. As part of the excavation of the adjacent segment, the temporary joint systems are removed for further use. Alternatively, diaphragm walls can also be implemented using the single-phase method. In this case, a binding agent suspension that hardens over time is used as a support liquid. When this method is used, additional sheet piles, supports or prefabricated concrete components can be inserted into the fresh suspension as structural elements, so that the resulting cut-off walls can also perform structural functions.

The grab is lowered into the trench and the soil is discontinuously transported. Larger blocks or sections of rock are punched through, excavated or displaced using modified grabs or heavy-duty chisels. Measuring systems can be installed to verify verticality.

Trench cutters are used to produce diaphragm walls in thicknesses of 500 mm to 3,200 mm. As they transport the spoil continuously, they are particularly suitable for depths of more than 40 m. Trench cutters operate with two opposite-running cutter wheels which, depending on configuration, are suitable for a wide variety of strata, including even ultra-hard rock. The soil material is cut by the rotation of the wheels, crushed, mixed with slurry and transported to the surface by a suction pump.

Hydraulic steering flaps control the cutter in both horizontal directions. The penetration depth and speed are regulated by controlled activation of the cutter weight. 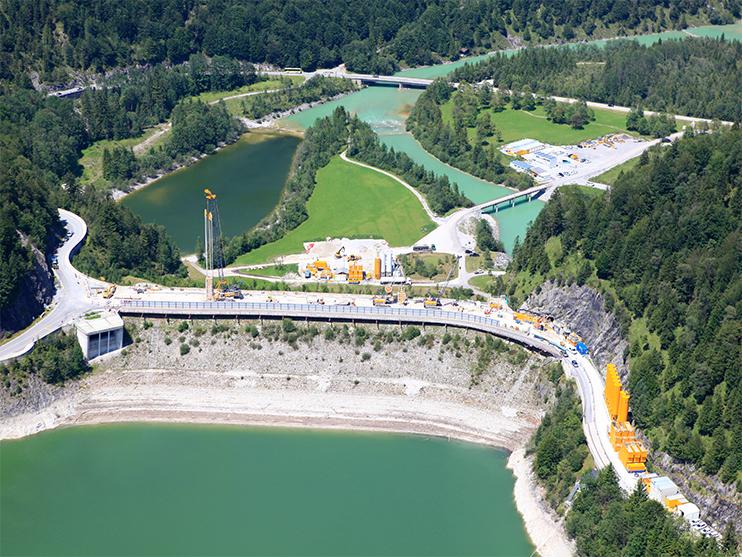